Most fire-damaged structures can be successfully repaired, this being the more cost-effective solution than demolition and reconstruction. Before carrying out any repair it is necessary to determine the extent of the damage to the concrete and reinforcement and hence their residual strengths. Guidance on assessment is given in Concrete Society Technical Report 68, Assessment, design and repair of fire-damaged concrete structures.

There are a number of on-site and laboratory-based techniques available to aid in the diagnosis of reinforced concrete condition. Techniques conducted on site include visual inspection, non-destructive testing and the removal of concrete and reinforcement samples, which may subsequently be examined and/or tested in the laboratory. On site tests include hammer soundings, rebound hammer (Schmidt hammer) and ultrasonic pulse velocity testing. Laboratory tests include petrographic examination, core testing and reinforcement testing.

It may be sufficient to take ‘soundings’ on the damaged concrete to determine the degree of deterioration. The ‘ring’ of sound concrete and the ‘dull thud’ of weak material are readily distinguished, and this test may be successfully done with a hammer and chisel to determine the depth to which the concrete has been damaged.

For the sake of assessment, it is generally assumed that concrete heated to above 300oC has lost all its strength. In many cases this temperature coincides with a change in colour of the concrete to red/pink; thus, identifying the boundary for the pink/red zone identifies the limit of damaged concrete. However, this colour change will not be evident with all types of aggregates and hence a physical assessment of the concrete strength should always be carried out.

There may be benefit in supplementing the normal on-site regime with some non-destructive testing. The rebound test gives a measure of the surface hardness of the concrete surface. Although there is no direct relationship between this measurement of surface hardness and strength, an empirical relationship exists. Due to the need for a flat surface to test and as a large number of tests is desirable to reduce the effects of variability, the rebound hammer is not generally suitable for use on spalled surfaces, which is often the case with fire damaged concrete. The UPV test for the estimation of concrete strength is well established but again there is no fundamental relationship between pulse velocity and strength. Although an estimation of strength can be obtained by correlation, the method has perhaps a greater potential for comparing known sound concrete with affected concrete. Other methods that have been less frequently used include the penetration resistance test (Windsor probe) and the BRE internal fracture test.

Petrographic examination (see separate entry Petrographic tests and Concrete Society Technical Report 71, Concrete petrography: an introductory guide for the non-specialist) is the definitive technique for determining the depth of fire damage in concrete. It is performed in the laboratory by experienced concrete petrographers, using optical microscopes. It is invaluable in determining the heating history of concrete as it can determine whether features observed visually are actually caused by heat rather than some other factor. In addition to colour changes of the aggregate, the heating temperature can be cross-checked with changes in the cement matrix and evidence of physical distress such as cracking and micro-cracking. 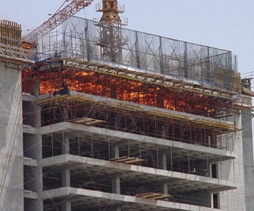