Large concrete boxes can be installed beneath existing railway or highway infrastructure to provide new underbridges with little or no disruption to traffic flows, unlike the traditional cut and cover methods. A tunnelling system is used to install the concrete boxes in which special measures are taken to control ground disturbance during tunnelling so as to maintain safe unimpeded operation of the traffic. The system has been used successfully on a number of projects in the UK (such as beneath the M1 motorway) as well as on the Big Dig in Boston USA.

The reinforced concrete box is cast on a jacking base in a pit adjacent to the road or railway. An open cellular shield is constructed at the front of the box; the form and structural thicknesses of the dividing walls and shelves are designed to suit the physical properties of the ground. Tunnelling is carried out incrementally with 150mm of excavation being followed by 150mm of box advance. When the box has been fully installed, any residual voids around the box are grouted up and the shield, jacking equipment, etc are removed. The underbridge is then completed by constructing the portal wing walls and roadway. 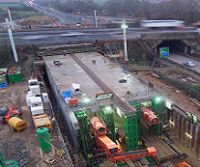