Generally jump form systems (taken to include systems often described as ‘climbing form’) comprise the formwork and working platforms for cleaning and fixing the formwork, steel fixing and concreting. The formwork supports itself on the concrete cast earlier so does not rely on support or access from other parts of the building. Jump form systems are suitable for construction of vertical concrete elements in high-rise structures, such as core walls, lift shafts, stair shafts and bridge piers. Systems are normally modular and can be joined to form long lengths to suit varying construction geometries.

Three types of jump form are in general use:
Normal jump or climbing form units are individually lifted off the structure and relocated at the next construction level using a crane.
Guided-climbing jump form units also use a crane but often provide greater safety and control during lifting as the units remain anchored to or are guided by the structure.
Self-climbing jump form systems do not require a crane as they climb up rails on the building by means of hydraulic jacks, or by jacking the platforms off recesses in the structure. It is possible to lift multiple units in a single operation.

Working platforms, guard rails and ladders are generally built into the completed formwork systems, along with complete wind-shield protection when necessary.

Jump form systems are typically used on buildings of five storeys or more; fully self-climbing are generally used on structures with more than 20 floors. However, a combination of crane-handled and self-climbing systems can be viable on lower structures. 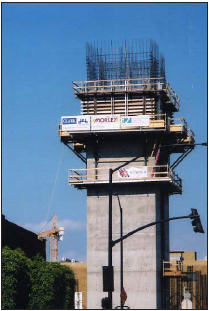