The strength and performance of reinforced concrete depend on a good bond between the steel and the concrete. It is only possible to achieve this if the steel is in good condition. All reinforcement should be protected from contamination by grease, oil, mud, mould oil, excessive rust (especially if it is flaky) and ice, plus any mill scale or concrete that is loose.

Once the reinforcement has been fixed, do not leave it exposed to the weather for long otherwise rust might form. Some of this could be washed off on to the formwork, and it would later make a permanent stain on the concrete. Starter bars sticking out of the tops of columns and walls are a frequent source of rust stains on the concrete below. So if such bars will be exposed for more than, say, a couple of weeks, they should be covered.

Mortar or grout droppings that are adhering firmly to bars need not be removed. If they will not come off easily, leave them.

The effect of rust on the bond between reinforcement and concrete is debated endlessly on site. There is no doubt that in many instances rust has been removed unnecessarily, at considerable cost. A little rust is not harmful, but loose mill scale and excess flaky rust should not be left in place. This need not be a difficult problem since both will usually drop off during normal handling. If loose rust is still in evidence when the reinforcement cage has been assembled it should be removed, e.g. with a wire brush, but care should be taken to ensure that soffit and other formwork is not contaminated in the process, which could lead to staining of the concrete.

Steel that has been stored outside for a long time may have rusted so much that its diameter is reduced; if there is any doubt, the diameter should be checked. Any reinforcement that is deeply pitted with rust should be discarded. 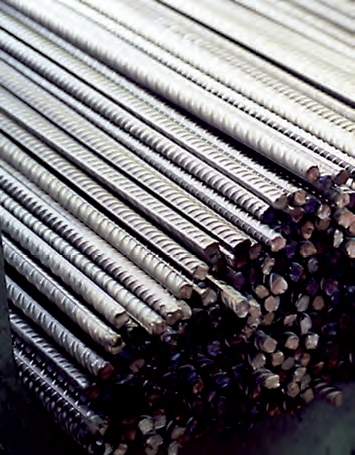