The flow test is used for high workability concrete (with a slump of more that 175 mm). The test is carried out in accordance with BS EN 12350-5, Testing fresh concrete. Flow table test. This replaces BS 1881: Part 105.

The 700 mm square flow table is hinged to a rigid base, proved with a stop that allows the far end to be raised by 40 mm. A cone, similar to that used for slump testing but truncated, is filled with concrete in two layers. Each layer is tamped 10 times with a special wooden bar and the concrete of the upper layer finished off level with the top of the cone. Any excess is cleaned off the outside of the cone. The cone is then raised allowing the concrete to flow out and spread out a little on the flow table. The table top is then raised until it meets the stop and allowed to drop freely 15 times. This causes the concrete to spread further, in a roughly circular shape. The flow diameter is the average of the maximum diameter of the pool of concrete and the diameter at right angles.

As well as getting an accurate measurement of the workability of the concrete, the flow test gives an indication of the cohesion. A mix that is prone to segregation will produce a non-circular pool of concrete. Cement paste may be seen separating from the aggregate. If the mix is prone to bleeding, a ring of clear water may form after a few minutes. 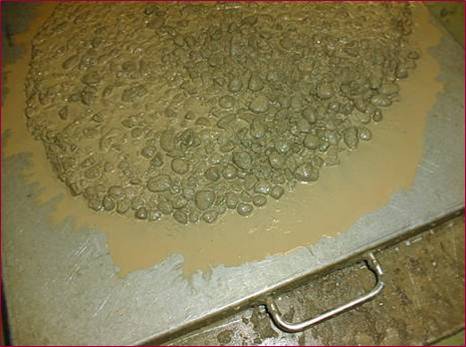 Identity testing of fresh concrete for properties other than strength