Cubes should be made in accordance with BS EN 12390-2, Testing hardened concrete. Making and curing specimens for strength tests.

They should be cast as soon as the concrete has been sampled and made as near to their final storage position as is practicable. The sample should be re-mixed thoroughly on a steel sampling tray, or if not available, it should be tipped onto a heavy plastic sheet, or similar impermeable material.

The cube mould should be clean and lightly oiled. It should be filled in 50 mm layers and compacted, with a steel tamping bar, with a minimum of 25 or 35 tamps per layer for a 100 or 150 mm mould respectively. After tamping each layer, the mould should be lifted slightly and dropped or the sides tapped, to close the top surface of each layer. The final layer should slightly overfill the mould. Finally the top layer should be trowelled off, level with the top of the mould. All sampling and test equipment should be cleaned immediately after use.

The fresh cube should be kept away from extremes of heat and cold. Ideally they should be covered to prevent surface evapouration and stored as close to 20C as possible until the moulds are stripped and the cubes placed into the curing tank, which will be maintained at the required temperature. If the ambient temperatures are very high, it may be advantageous to place the freshly made cubes, in their moulds, into the curing tank. Cube mould baseplates can be used as lids. This should be done after initial stiffening of the concrete and care should be taken to avoid disturbing the surface or washing out some of the sample. 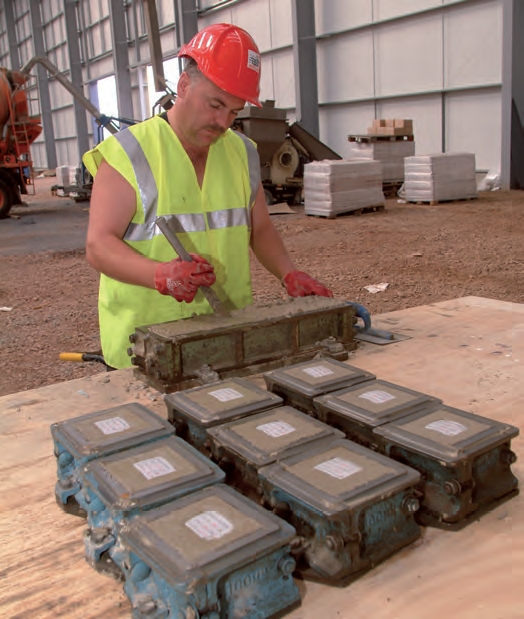