Tunnel form systems are used for the construction of units for hotels, flats, houses and similar structures. The traditional approach would be to construct walls and floors separately. With tunnel form systems, storey-height inverted L-shaped units are locked together to make inverted U-shaped wall, floor and ceiling forms, which are cast as a single unit. Doorways and corridors are boxed out, conduits are installed for lighting etc, and reinforcement fixed. The concrete is then cast. Heaters are generally installed inside the forms and the ends of the tunnels sealed. The raised temperature accelerates the strength gain of the concrete and the forms can be stripped and repositioned the next day. The forms are steel-faced; the resulting cast surfaces can be decorated with a minimum of preparation. Although the system is best suited to a regular arrangement of identical rooms, variations in width and height can be accommodated by the use of infill panels. 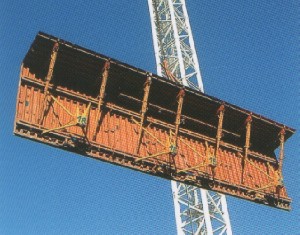 Tunnel form being craned into position
×