In addition there have been a number of conferences dealing with FRP prestressing and reinforcement materials. 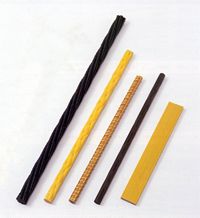 Other references:CLARKE, J. L. (Editor) ´Alternative materials for the reinforcement and prestressing of concrete´, Chapman & Hall, 1993.