Carbon fibre composite plates can be used for strengthening beams and slabs. They are bonded to the concrete surface using the same basic techniques as for steel plates. Fabrics may also be used. Applications have generally been to the soffit to increase the bending resistance though some applications have been on the top surface. Limited use has been made of plates bonded to the sides of beams to increase the shear resistance.

In the UK, the main applications have been bridges (following the requirement to carry heavier vehicles). In addition the floors of various buildings have been strengthened to carry additional loads or following structural alterations.

One disadvantage of using FRP is the risk of fire, vandalism or accidental damage. For bridges over roads the risk of soffit reinforcement being hit by over-height vehicles should be considered. In general, some form of protection will be required. When strengthening top surfaces care must be taken to avoid damage in service, for example during the removal of surfacing. 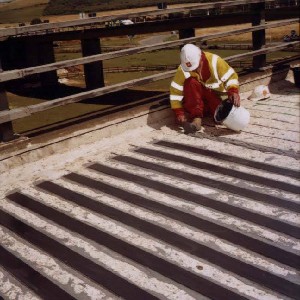