Foamed concrete - Examples of the use

﻿Foamed concrete was used for construction of new railway bridge embankments in Colchester to reduce the load imposed on the low strength in-situ ground. The use of rigid foamed concrete resulted in small lateral loads, no settlement and allowed a significant reduction in the number of piles and abutment wall thickness.

﻿The Transport Research Laboratory has led work on the reinstatment and strengthening of arch bridges with foamed concrete. A number of full-scale projects have been completed including the repair of a 25-year-old bridge deck of the Llandudno junction and Deganwy flyover, in North Wales. The voids between the arches and final road surface of the new Kingston Bridge over the Thames were filled with foamed concrete and two other old bridges have been strengthened in a similar manner. In most cases when filling bridge arches, higher density and strength mix (e.g. 1400kg/m3 and 7N/mm2 respectively) is used in the layers near the road surface while lower density mixes (e.g. 600kg/m3) are usually employed at greater depths.

﻿The foundations for two access roads at Canary Wharf were constructed with foamed concrete to reduce the vertical load on the foundations and reduce settlement. Other examples include stabilisation of the tunnel collapse at Heathrow airport, filling voids under roads, filling redundant sewer pipes and inspection chambers, and a large-scale harbour fill in Holland. Probably the largest use by far in the UK is the stabilisation of the Combe Down Stone Mines near Bath, which will eventually require some 400,000m3 of foamed concrete (density 650kg/m3, strength 1N/mm2).

﻿In Holland, foamed concrete reinforced with aramid fibres has been used by the Amsterdam city housing authority (Stadelijkem Woningbouwdienst) as a soil sealant layer. Fibre reinforced foamed concrete has also been used as a shock-absorbing material to trap lead bullets at US military training establishments preventing leaching into groundwater. 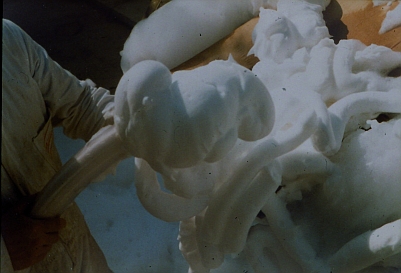 Foam that is used to make foamed concrete
×