﻿Expanded tunnel linings were first patented in the late 1940s. They have since been used in hundreds of kilometres of tunnel in stiff clay and chalk. A number of segments are used to form a complete ring, with a wedge block at the crown that expands the ring against the surrounding clay or chalk.

The units are designed to act primarily in compression, though a limited amount of reinforcement is provided to deal with transport, handling and erection forces. ﻿The details of the units, such as the number to form a complete ring, the length along the tunnel and the thickness, will depend on the size of the tunnel, the method or erection and the soil conditions.

Expanded linings have no mechanical fixings between the units and rely on the mobilisation of the passive earth pressures to maintain their stability. Hence they are suitable only for good consistent cohesive ground conditions.﻿ Seals are generally provided between the units to ensure water-tightness. Voids behind the linings may be grouted. 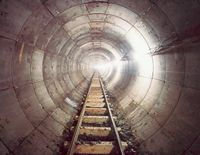