Standard precast bridge beams of various shapes and depths of cross-section are available for a range of spans and applications. This form of construction is economic for a wide range of spans, but there use may be limited by the length of beam that can be transported. In the UK this is normally 27.4m, though lengths up to 40m may be transported via motorways with special permits.

Types of standard bridge beams include:

Inverted Tee beams. These are placed adjacent to each other, transverse reinforcement passed through pre-formed holes and the space between the units filled to form a solid slab. Typical spans vary from about 6m to 18m. Wide box beams are used in the same way as inverted Tee beams, but require less in-fill concrete, giving a lighter cross-section.

M beams, U beams, Y beams and super-Y beams are spaced apart, permanent formwork is placed between the top flanges and an in situ deck slab cast over the top. Special units are used for the edge beams. The top surface of the beams is suitably prepared and has projecting reinforcement so that slab and beams act together. Typical spans vary from about 16 to 40 m, the longest spans being with super-Y beams.

Though primarily intended for use in bridges, standard bridge beams are suitable for other heavy loading applications, such as docks and industrial developments. Detailed information on standard bridge beam properties should be obtained from manufacturers. 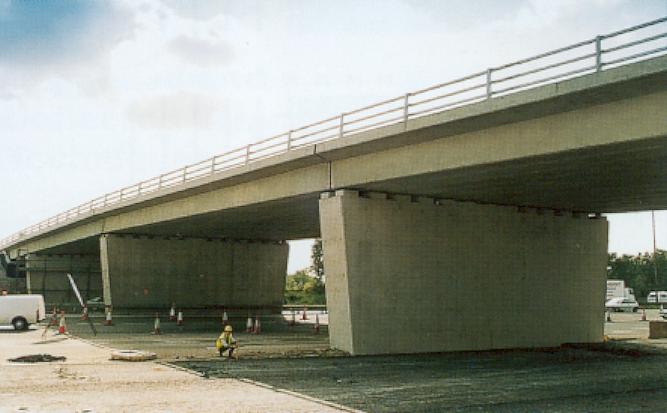